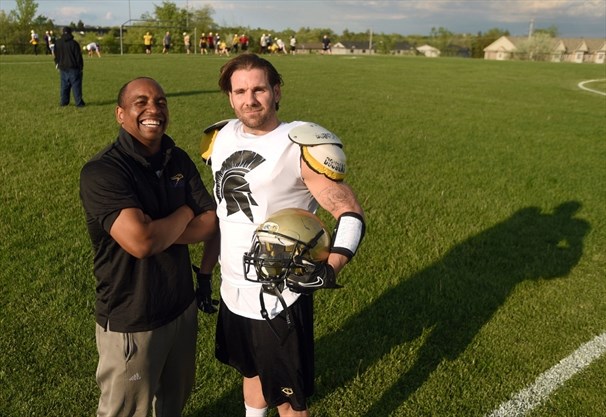 Here is a link to the original article: https://www.therecord.com/sports-story/7343981-beckford-and-ashe-back-together-again-with-the-outlaws/ Please, like and share it to give the writers your support.

They won a Vanier Cup with Wilfrid Laurier University on a cold day in Hamilton back in 2005.

Later in life they stood side by side as the best man at each other’s wedding.

Now Kitchener’s Jahmeeks Beckford and Shawn Ashe have reunited on the football field with the Tri-City Outlaws.

Beckford is the team’s assistant defensive coach while Ashe is making his return as a slot receiver after lengthy hiatus due to a concussion.

“I’m a big fan of his,” said Beckford, 36. “It’s fantastic to see him out there comfortable and excited.”

Their football story goes back more than two decades.

The duo met when they were about 12 years old.

“We dated the same girl … not at the same time,” said Beckford with a laugh. “She brought him to the neighbourhood and we connected.”

The pair bonded over a mutual fondness for football and used to walk to Eastwood Collegiate Institute together and then back home again after pigskin practice.

They’ve been teammates ever since — from the youth league Vipers to the high school Rebels to the university Golden Hawks and, lastly, the Outlaws on the senior men’s circuit.

“I couldn’t ask for a better best friend,” said Ashe, 36. “He’s one of the most genuine, fun loving and kind people that you’ll meet. He’s been with me through a lot of tough things and vice versa.”

One of them included a severe concussion that knocked Ashe off the gridiron about three years back.

Ashe was playing safety for the Outlaws at the time when he collided with an Ottawa player in the opening week of the 2014 season.

The hit sent Ashe to the sidelines for five weeks. He pushed through the rest of the campaign before realizing he needed a longer layoff and spent the next two-plus years getting healthy before feeling the itch to return.

“I had no intention of playing,” he said. “I thought I had hung up the cleats. But being around the Outlaws last year and the game … you just get this urge. It’s hard to describe.”

The Outlaws kicked off their season this past weekend with a 38-19 victory over the Steel City Patriots in Hamilton.

The squad, which plays in the nine-team Northern Football Conference, hosts the Oakville Longhorns in their home opener Saturday at Rogers Field in Cambridge, at 7 p.m.

Ashe felt great in the team’s debut and caught six passes for 98 yards with a fourth-quarter touchdown.

“He looked right back in his element,” said Beckford, who retired from playing after rupturing his Achilles in 2008. “He’s an incredible competitor.”

More importantly, it just feels nice to have his old pal back with the Outlaws.

“It’s a place we’ve been,” he said. “We grew as football players and best friends there. So being back together on the field in this capacity is just fantastic.”