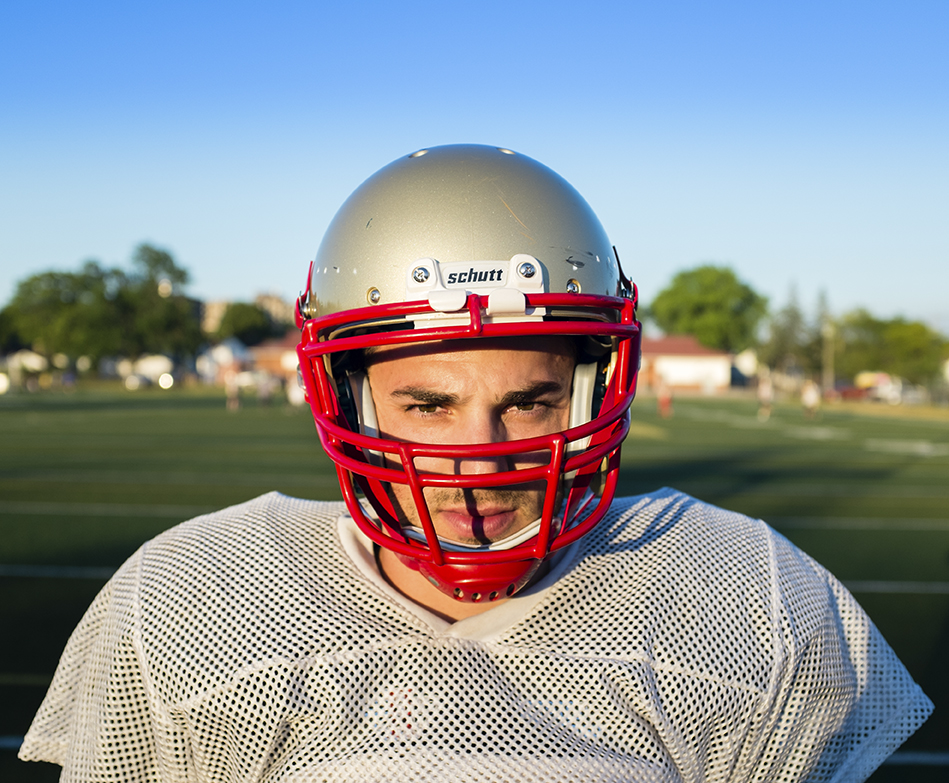 By Troy Shantz (Original Article: http://thesarniajournal.ca/city-schoolteacher-mixes-passing-grades-and-passing-plays/ ) Remember to like and share the original article to support NFC football and local media.

A teacher at Queen Elizabeth II School has his own way of dealing with stress outside the classroom.

“I love hitting guys, I love getting hit … I think it’s a really good outlet,” Ryan Lounsbury, who is a member of the Sarnia Imperials football team.

The six-foot-one, 195 lb. wide receiver has been an Imperial for nine years and was recruited by Jake Cherski, who still manages the team today.

Many players on the semi-pro football team also have nine-to-five jobs, and Lounsbury is no exception. He teaches Ojibwe at Queen E.

“You walk into work with a limp sometimes but it’s totally worth it,” he said.

Lounsbury got his start at the age of eight playing Sarnia Minor Athletics Association football. Though hockey dominated his adolescent years he also donned the blue and white football jersey for SCITS.

Lounsbury had a short stint with the Lambton Lions, and after finishing an environmental science degree at Windsor University, followed by teacher’s college, found his way back to the field and joined the Imperials.

It was culture shock at first, he said.

“Coming out here and playing against men? Totally different experience,” he recalled.

“I’ve been hit hard a few times, I’ll tell you that. But it’s an adjustment. After you play a couple years you take those hits, you learn to deal with it, it almost gets you fired up after that.”

The Imperials are one of nine teams in the Northern Football Conference representing cities between Sudbury and Ottawa.

Lounsbury has experienced the lows and highs of the franchise, including last season’s exciting trip to the finals. He feels good about the current season as well, he said.

“Nothing is ever out of reach. We have some great athletes.”

The league uses a fusion of NFL and CFL rules, and the level of play is fairly high, Lounsbury said. Several Imperials have had tryouts with CFL clubs and the league is a hotbed for nurturing talent for the professional league.

The skills he’s learned have translated over to his time on the gridiron, he added.

“A couple years ago I stepped up. I feel like I’ve become a leader too.”

For details on Sarnia Imperials schedule and roster, visit www.nfcfootball.ca/team/sarnia-imperials