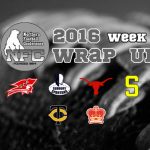 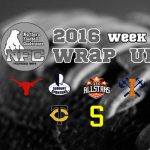 Well folks the NFC is revving up to be an outstanding 2016 season with all teams scoring points and all teams generating excitement at home about Saturday Night Football!

Week 3 of the NFC featured 3 games and the total point differential between the 3 games was only 7 points….yes only 1 converted TD.

NFC fans were thrilled to watch 2 games go down to the wire including another overtime battle in Cambridge. Men’s semi-pro level football is alive and well in Ontario and poised to grow this off-season if these early signs of football excitement continues to attract football players who thought football was over for them after CIS or high school.

In the first game of Week 3 the Spartans travelled to Oakville for their first game of a back to back home and home series. The battle was fierce and fast as the Spartans and Longhorns played a truly competitive football game before the fans at Bronte Field in Oakville. The game brought back memories of the tough battles these two teams had in the late 1980s and early 1990s as the Spartans battled their opponents all game to set up an exciting 4th quarter finish.

The Spartans found themselves trailing by 5 in the fourth quarter and put together a drive that scored to give them a last minute 21-19 lead and it appeared that the visitors might have stolen this game. But on the last drive of the game the Longhorns moved the ball and then put it up on a long bomb where it was caught and in a strange breakdown in tackling the receiver broke away and scored to give the home town crowd their 2nd win since 2014. BUT the battle lines are still drawn in the sand and the eventual winner of this series will be decided this weekend in Sudbury as the Longhorns travel north to take on the Spartans at home…. and all signs point to this game being a bone crushing fight to the end again. So if you are a Sudbury football fan…. best to book off Saturday night and go watch this game that features a rivalry of more than 40 years.

In game 2 of Week 3 the Sault travelled to Cambridge to take on the Tri-City Outlaws. This game was a defensive battle featuring the Sault Steelers working on rebuilding their offense while relying on their defense to keep them in games this season. In week 2 the Sault defense held the strong Sarnia Imperials offense to only 17 points despite being on the field for much of the game. Steeler coaches were hard at work to get the offense clicking a little better for week 3 and they did as the Steelers offense improved by scoring their first TD of the season this week. The Tri-City Outlaws having lost both their week 1 & week 2 games by a TD or less appeared to be on a mission to keep working hard no matter what. The Outlaws faced the tough prospect of going 0-3 and continued to battle all game.

The defense from both teams were outstanding as the game ended in a 7 – 7 tie which gave the Outlaw fans a bonus for their admission in getting to watch some overtime. With the Outlaw offense up first they scored and it was time for the rebuilding young Sault offense to respond. The team showed character with all the pressure of the game on them and they grinded out a drive to score what would appear to be a tying major. The Outlaw defense put in a huge effort to block the convert and found a seem to get a hand in there to block the kick and the ball did not get through the uprights. And so the Outlaws defense, having been hammered in the past two weeks late in the game, came up big to win this one. The NFC Insider has it right though….the Sault offense is improving and their defense will decide some games. On this day though….it was the Outlaw defense that created the 1 point Outlaw win 14-13.

In Ottawa the mighty NFC Defending Champion GTA All Stars went out there to face their biggest challenge yet. They met the challenge and the battle was on from the very first set of downs. It was obvious real fast that nobody was handing anyone a free game. There were some solid hitting in this game and some great pass defense as the Ottawa Invaders prepared for the GTA All Stars all week. Their preparation paid off as they held the All Stars to their lowest half time score in years. The All Stars may have taken the Invaders lightly and it cost them a little. But under no circumstances does this mean the GTA All Stars are not still the team to beat. The game battled on through the 3rd and 4th quarter very closely in front of a very good home crowd cheering on the Invaders.

Despite the crowd and being away the GTA All Stars hung on to the very end but as it was the Invaders defense were able to keep the All Stars from coming back and the Invader offense was able to eat up enough clock to see time expire with the Invaders holding a slim 15 – 14 lead. The Invader fans were on their feet, cheering and gasping at every play because at any time the powerful GTA All Stars could have put it in the end zone. Comments from fans ranged from “Phew!! That was close!” to “I don’t know if my heart can take another game like that!” It was great to see a crowd be so entertained by a couple of very good teams playing a solid caliber game of football. These two teams meet again in Toronto so we’ll see how they both improve and how the Invaders take their game to Toronto.

Week 3 was a great display of the fun and competition you get watching NFC football or playing it. Contact a team near you and get into the action!! 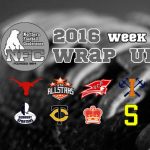 Here is a summary of the Week 2 in the NFC 2016 campaign. More information will be posted as we get it. 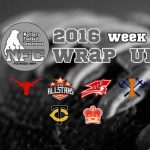 The 2016 season kick-off has come and gone and now that the dust has settled here is what has happened. The season started off with the scheduling controversy but trucked ahead to bring you great NFC football action early on.

You’re asking, where is the crunchy stuff? Where are the stats? I need a player profiles? We can assure you we are working on it as we speak. We are trying to reorganize to make the NFC more fan friendly so we are concentrating on getting the infrastructure working and content flowing for you. nfcfootcall.ca will be your outlet for all things in Ontario Semi-Pro Football.

Each Game link contains a summary of the game and the scores. In the future they will have analytics as well as stats. Now, we are getting the format down.

Don’t forget to check out the Power Ranking for the week and find out if the NFC Insider’s predictions came true or – was all smoke and mirrors.