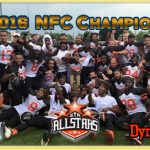 In a tremendous game in Sarnia, The GTA All-Stars defeated the Sarnia Imperials 29- 21 to remain the reigning-defending NFC Champions.

In Sept 10th our NFC Champions will travel to Alberta to defend their National Championship. 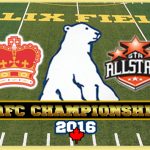 After a tumultuous start and an exciting season the NFC is down to the final two teams: The regular season champions, The Sarnia Imperials will battle the reigning 2015 NFC Champions, The GTA All Stars. The “Red Army” with their high-octane offence will contend with the juggernaut GTA All Stars.

In Week 5 the GTA All-Stars routed the “Red Army” at their home field. The loss did not sit well and the Imperials rallied later in the season and defeated the All-Stars in week 8 action. Both teams have a win under their belt. Both teams are hungry for the NFC title and their successful journey through the post season sets up a compelling rubber-match for the NFC Championship.

This championship match reveals a number of stories. First, the quarterbacks Pat Wright (Sarnia) squaring up against “Touchdown” Tommy Denison (GTA). Pat Wright in the prime of his NFC career against the legend in Denison. Both Tommy and Pat are the offensive coordinators calling the plays for their teams and thus taking that part of the game on their shoulders. On the defensive side of the ball, you have two smashmouth high-calibre squads ready to take a stand to via for the title.  The Imperials want to contain the pass and pressure Denison to force mistakes.  The All-Stars need to grind the Imperial offense to a halt and deny them any momentum if they hope to put the “Red Army” in retreat. If you want to talk offense you are looking at the two best in the league. The GTA pass game is second to none, coupled that with a pounding run game. The Imperials match the GTA’s offence with a high-octane aerial attack and a grinding ground game. These two teams are shadowy reflection of each other and you can expect some great NFC Football.

Blunt Talk Pod-Cast with Gino Arcaro regarding the NFC Championship

Episode 1: Championship rings are not handed out as consolation prizes. Guest Pat Wright, quarterback of the Sarnia Imperials, explains insights into the preparation required for a championship game.
Read more at http://www.blunttalk.libsyn.com/#uCcpztEklCg8fFrs.99

Episode 2: Championship rings are not congeniality awards. You have to spill your guts for them. Guest Adam Hart, defensive tackle with the Sarnia Imperials, explains insights into the preparation for a championship game

Episode 3: Championship rings are not handed out like participation ribbons. You have to fight like hell for them. Guest Tom Denison, quarterback of the GTA All-Stars, explains insights into the preparation for a championship game

Episode 4: True love of the game – no million dollar contracts. Championship rings don’t go to second best. You have to fight like hell for them. Guest Marcus Wisdom, Defensive Captain of the GTA All-Stars, explains insights into the preparation for a championship game.

Episode 5: Championship rings are not cheap. They cost a fortune. Guest Gord Goddard, NFC Executive, and owner of the Sudbury Spartans, gives his prediction for the Northern Football Conference championship game.

The GTA AllStars advanced to the 62nd Plaunte Memorial Championship Game with a 36-15 victory over the Montreal Transit. The Ottawa Invaders edged out the Sarnia Imperials in an edge-of-the-seat 20-19 win to advance to face the GTA AllStars in the NFC’s Championship match.