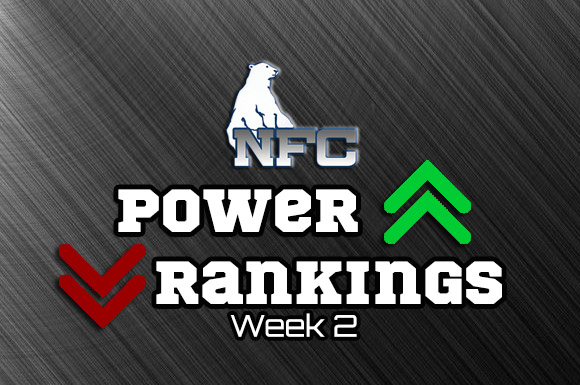 It’s an overall look at the league during the season. Teams are going to rise and fall in these rankings on a weekly basis.

#1 GTA All Stars
***Defending National Champs***
They spent week 1 shaking off the “ring rust” (pun intended) against the Longhorns but they got the job done. They continue to occupy the number 1 spot in this list until someone beats them.
Week 1
WIN GTA 34 – 16 over Oakville

#2 Sarnia Imperials
In week 1 the Imps came out firing on all cylinders but Tri City closed the gap with a late surge in a penalty filled contest. They had the offence rolling and congrats to Pat Wright for his NFC record 109yard TD pass to Ryan Lounsbury
Week 1
WIN Sarnia 35-30 over Tri City

#3 Ottawa Invaders
The Invaders took care of business with a short bench in week 1 against the deepest roster in the NFC.
Solid effort by the Invaders at home
Week 1
WIN Ottawa 27-22 over SCP

#4 Steel City Patriots
They played tough against the Invaders on the road – sending a strong message that they are going to challenge each and every week this season.
Week 1
LOSS SCP 22 – 27 to Ottawa

#5 Tri City Outlaws
The Outlaws as expected are moving up in the standings after a solid performance in Sarnia. A strong 4th quarter comeback on the road had the Imps on their heels. Every week is a new challenge. And this team won’t back down.
Week 1
LOSS Tri City 30 – 35 to Sarnia

#6 Oakville Longhorns
This week they fall a few places – more a result of other teams keeping their games closer than the performance by the Horns. They are in tough this week with the second half of this home and home with GTA.
Week 1
LOSS Oakville 16 – 34 GTA

#7 Sudbury Spartans
They haven’t played yet in 2016 – so they will drop a spot this week until we see how they perform on the field. Rumor is that a few veteran signings this week have the team excited for their home opener June 4th. We will have to wait and see.
Week 1
BYE Week

#8 Sault Steelers
The Sault also sat out week 1 in a bye week. They will need to have a strong performance against Sarnia to move up in the standings.
Week 1
Bye Week