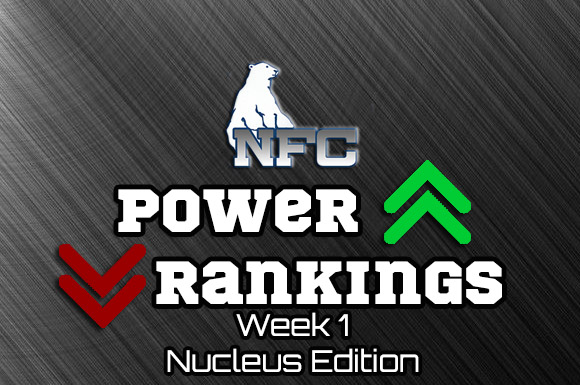 This ranking is pure opinion and future ranks are for entertainment purposes only! Entertainment – put a smile on your face, get a reaction that is more then just a nod of the head, engage you in the workings of the league, make you want to come back for more.

It’s an overall look at the league during the season. Teams are going to rise and fall in these rankings on a weekly basis.

So enjoy the rankings –  every team believes they are a championship team! And rightly so…

#1 GTA All Stars
***Defending National Champs***
To be the best – you have to beat the best. This team may be suffering from “Championship Hangover” as many players are still sitting at home unsigned. Regardless they have enough talent to earn top spot in the preseason.
I predict 1-0 after this week…
Prediction:
WIN GTA 28-24 over Oakville

#2 Sarnia Imperials
The Imps are back with most of last years squad plus a few key players from years past. A hungry squad that will be a team to watch in 2016. They have solid player numbers to go deep in the playoffs.
Prediction:
WIN Sarnia 35-14 over Tri City

#3 Oakville Longhorns
Yes I know they have only one win the last 3 years. But they have gotten better every year. They have a strong nucleus of talented players who keep getting better. This team has great player numbers and a solid coaching staff. I expect big things out of this years Longhorn squad.
Prediction:
LOSS Oakville 24 to GTA 28

#4 Ottawa Invaders
The Invaders have had some player turnover and their numbers are down from years past. But with TJ Williams back running the ball – the Invaders can capitalize on two strengths, their run game and a great coaching staff.
Prediction:
WIN Ottawa 24-21 over SCP

#5 Steel City Patriots
This Hamilton franchise has over 70+ registered players. They should have depth at every position. At this time – they are still an unknown. We will see the first few weeks of the season how they measure up with the top NFC teams.
Prediction
LOSS SCP 21-24 to Ottawa

#6 Sudbury Spartans
This program has improved in the standings every year since 2012. They have a majority of their team back from last season. With two of the best running backs in the league and a strong offensive line – they should have another solid season.
Prediction
BYE Week

#7 Tri City Outlaws
The Outlaws are in rebuild mode – they have a solid nucleus and mix of both old and young players. They will get stronger as the season progresses. I expect them to move up in the standings week to week.
Prediction:
LOSS Tri City 14- 35 to Sarnia

#8 Sault Steelers
This will be a rebuild season for the Steelers. They have a strong nucleus of talented vets and will be led by perennial All Star Brandon Lewis. But without player depth – they are going to have some struggles.
An influx of new players will make this years squads – heads up better than last season. They will move up in the rankings as the season progresses.
This ranking is more a look at what last year was about than what they can do this year – which is unknown.
Prediction:
BYE Week