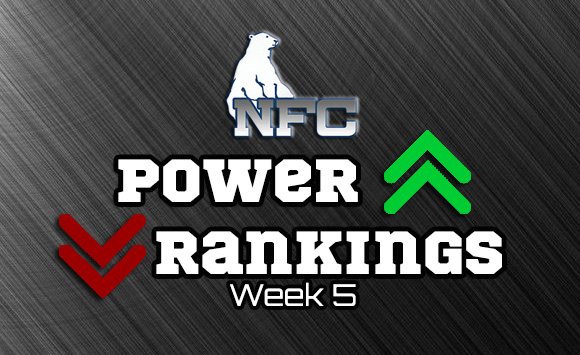 #1 Sarnia Imperials
This Sarnia team may be something special and is clicking just in time for a showdown with #2 GTA this week.
They have put up big numbers on offense and playing stellar defense. Special teams have been excellent. The only undefeated team in the league gets the nod at #1 in the rankings.
Week 4
WIN 61-6 over the Sault

#2 GTA All Stars
***Defending National Champs***
Dropping down a spot because the #1 ranking would be based solely on Touchdown Tommy. Without Tom leading the offense – this team is very good but not superstar good. The showdown with Sarnia this week will be a game to watch. Expect Tommy to play the whole game this time.
Week 4 Results
WIN 42-13 over Hamilton

#3 Ottawa Invaders
The Invaders are a team on the rise and looking to establish themselves as a championship contender. They took care of business in Tri City this week and didn’t letdown after the upset win over GTA last week. Solid all around team and on a roll right now.
Week 4
WIN 25-9 over Tri City

#4 Steel City Patriots
I’m leaving them here for another week – despite the big loss. This team has depth and talent. That can take a team far in the playoffs. They have a showdown with rival Oakville this week which will be an interesting game.
Week 4
LOSS 42-13 to GTA

#5 Sudbury Spartans
The Spartans finally got the offense going. Lots of talent and lots of depth on this team. Playing a solid system. Just gotta put in the workman-like pride and get it done.
Week 4
WIN 40-36 over Oakville

#6 Oakville Longhorns
This is a team with great player numbers. They have a few very talented players who can win games down the stretch. This weeks game versus Hamilton is going to be a good one.
Week 4
LOSS 40-36 to Sudbury

#7 Tri City Outlaws
They gave up some points early to Ottawa and couldn’t recover. But they played smash mouth defense the rest of the game. This team will bring it every single game this season and won’t roll over for anyone.
Week 4
LOSS 25-9 to Ottawa

#8 Sault Steelers
This is looking like a rebuild season for the Steelers. The Imps blew the score up on them in Sarnia – the same way the Sault did for years when they were on the road and facing outmatched opponents.
Week 4
LOSS 61-6 to Sarnia