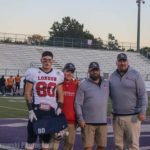 This article is originally from Canadian Football Chat
Please click through to the original article to give them the credit and hits they deserve.
https://canadafootballchat.com/mcmaster-marauders-commit-takes-unconventional-route-to-u-sports/

The Author is Elizabeth Karchut.  Click her name to read other interesting football articles by her.
Photo credit to Joanna Kurowski

It took Hayden Amis, a receiver from Southwood High School, some time to find his path, but after putting his heart and soul into the sport he loves, he was rewarded with an offer from the McMaster Marauders.

His story begins in 2014. “At the time, he wasn’t university bound, not having an academic bone in his body,” said his father, Steven Amis. Hayden continued to play football with the Cambridge Lions (OPFL) and his high school club, the Southwood Sabres (WCSSAA) for as long as he could. When he graduated, he played for a bit at Conestoga College.

“He resigned himself that he’d have to work for a living,” Steve said. “It takes kids a little extra time sometimes…itching to play football, he joined the men’s league Tri-City Outlaws this spring and the ‘bug’ was reignited.

It was here that Hayden decided to take a gamble; he quit his job and focused solely on football. “Playing both ways as a rookie with the Outlaws, as well as long-snapping, gave him a ton of confidence,” Steve said. Hayden found success at the long-snapping position and was named as the team’s special teams player of the year for 2017.

The day after the Outlaws’ championship game, Hayden was lining up with the London Beefeaters (CJFL). The 6’4, 220lbs slotback and wide receiver finished first in the league in receptions and was named as the team’s offensive MVP.

“With the support and encouragement of the Beefs’ and Outlaws’ staff and players, he started upgrading his marks and the calls from U Sports teams started coming in,” Steve said.

One such team was the Marauders, who Hayden took a shine to. “I committed to McMaster because of the academic support, (its) distance to home and the culture in place,” Hayden said, who is interested in environmental studies. “The coaching staff seems great. I can’t wait to get to work with them.”

Hayden is from Ayr, Ontario, which is west of Hamilton.

“The boy’s passion and love of football has him excited about a university education at a prestigious school and what the future could hold,” Steve said. “Football has always been sold as having a positive influence teaching all the tenants that we can list, but here is proof positive that it can make a big difference in a kid’s opportunities and (that) it’s never too late.”