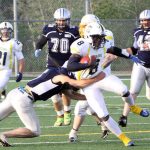 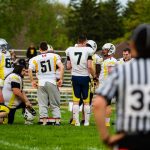 Original article:  https://www.sootoday.com/local-sports/late-touchdowns-lift-steelers-956955
Please like and share the original story to help local media with their coverage of NFC teams and events.

A pair of late touchdowns were ultimately the difference.

A 27-yard touchdown run by Josh Gauthier with 5:14 to go in the fourth quarter lifted the Sault Steelers to a 23-10 Northern Football Conference win over the Sudbury Spartans Saturday night at Rocky DiPietro field.

The major came with the Steelers trailing 10-8 at the time in a game that saw the home side fall behind 10-0 in the opening half.

“It was key,” said Steelers Coach Brandon Lewis. “It was vintage Josh.

Gauthier finished the day with 104 yards rushing on 11 carries and a pair of touchdowns.

The victory improves the Steelers record to 2-2 after a road win last weekend in North Bay.

“Everything you do in your first year is great but when you know the type of competitors we have on our team, it’s possible for us to push the best teams in this league,” Lewis said.

Sudbury opened the scoring on a 13-yard field goal in the opening quarter by Massimo Cimino.

In the final minute of the opening quarter, Sudbury’s Sean Moore caught a two-yard pass to increase the lead to 10-0.

“The first half seemed to be very tough on us, more mentally than anything,” Lewis said. “There were some mistakes and penalties to start the game. That can take a toll. We hung in.”

Steve Hiiemaa would run the ball in from 68 yards out late in the fourth quarter to seal the Steelers win.

Hiiemaa finished the day with 130 yards rushing on 10 carries.

Offensively for the Spartans, Josh Cuomo had 55 yards rushing on 15 carries.

Defensively for the Steelers, Matt Gauthier had six tackles while Dalton Povey had 5.5 tackles. Tom Twentyman had five tackles and Jon Bujold had 4.5.

Erik Conrad and Matt Furlino had six tackles each for the Spartans, who fall to 1-3.

The Steelers return to action on June 23 against the Steel City Patriots. Kickoff at Rocky DiPietro Field is set for 7 p.m. 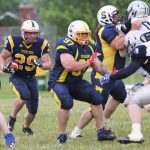 Original article:  http://www.thesudburystar.com/2018/06/17/gauthier-gallops-to-winning-score-2
Please like and share the original story to help local media with their coverage of NFC teams and events.

He’s not the player he once was.

At age 35, Josh Gauthier is no longer the record-setting, championship-winning, nearly-unstoppable running back who once wreaked havoc on Northern Football Conference defences.

Gauthier ran 27 yards for the go-ahead touchdown on Saturday, as the Sault Steelers rallied from a 10-0 deficit to defeat the Sudbury Spartans 23-10 at Rocky DiPietro Field.

With the home team trailing 10-8, Gauthier ran a counter, bolting nearly untouched into the Spartans end with 5:14 remaining in the fourth quarter.

Quarterback Alanzo Clarke ran in a two-point conversion and the Sault had a 16-10 lead.

Seeing how hard the Spartans were pursuing on power-running plays, Gauthier said he “told Ashton to call a counter,” referring to offensive coordinator Ashton Young. “I took two or three hard steps to the right and the whole defence shifted. You could run a semi through the hole.”

He didn’t need quite that much room, however.

“But once that happened I could use my wheels,” added Gauthier, who had scored earlier on a four-yard run and finished the evening with 104 yards rushing on 11 carries.

“The Gauthier play was the key to the game,” added head coach Brandon Lewis, whose club won its second straight, improving to 2-2 on the season. “It was vintage Josh. He wasn’t going to be stopped by arm tackles. You get him the ball and magic happens. He’s not even in game shape and he’s still a dominant player – absolutely.”

According to Spartans head coach Junior Labrosse, Gauthier’s run was a game-changer.

“That broke our back,” Labrosse added. “They had Gauthier hidden inside. And he paused with the ball until things opened up.”

“I don’t have that top gear like I used to have,” Gauthier admitted. “I’m so far from being what I used to be. But game smarts is something I’ll always have.”

Meantime, three minutes later, the Steelers sealed the win with another impressive run. Stevan Hiiemaa broke a series of tackles and galloped 68 yards for another touchdown.

Cam Basham booted his second convert to wrap up the scoring.

Jesse Hill had the other point for the winners, nailing a punt 35 yards for a single just before halftime.

“It was a big character win,” said Steelers head coach Brandon Lewis, whose team plays host to the Steel City Patriots this Saturday at 7 p.m. at Rocky DiPietro Field. “We made some mistakes and took some penalties and the first half was very tough on us. But at halftime we talked about leaving the first half behind us.”

Lewis said he thought his team managed the ball better in the second half. And the Steelers defence “had a heck of a game,” he added.

“We were strong and we hit hard,” said first-year linebacker Tom Twentyman, who finished with five tackles. “We had a lot of guys playing a lot of snaps, but we dug deep and found a way. We’re getting better every week.”

“We played three-quarters of a game,” said Labrosse, whose club fell to 1-3. “We had some mental breakdowns. Our offensive line played its best game so far this season, but penalties killed us.”

On defence, Matt Gauthier had a team-high six tackles for the Sault. Dalton Povey added 5.5 while Jon Bujold was credited with 4.5 tackles. Ron Kelly had an interception. 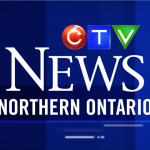 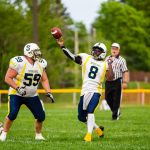 Original article: https://www.sootoday.com/local-sports/sault-steelers-are-back-9-photos-935554
Please like and share the original story to help local media with their coverage of NFC teams and events.

After a year away, the Northern Football Conference has returned to Sault Ste. Marie.

The Sault Steelers returned to action on Saturday night at Rocky DiPietro Field against the Tri-City Outlaws.

The team took a hiatus in 2017 after low players numbers during their spring tryout.

In August, the organization announced intentions to return to the league this season and began the recruiting process.

The team held recruiting nights during the winter and player interest led to the team having 24 players signed with the intent to play just before Christmas.

Longtime Steeler Brandon Lewis, who will serve as coach this season, said in December that the hiatus may have helped interest.

“It’s weird to say it, but maybe the fact that (the program) had gone away (played a role in players being interested),” Lewis said. “A lot of players over the course of a few years who said they want to play and at some point are going to play, that time ran out because it was gone, and now those guys are showing interest, which is good. We’re really putting it out there that we want to come back and we want to come back strong.”

The team was officially welcomed back at the NFC annual general meeting in January.