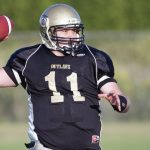 CAMBRIDGE — They lost in the championship but the Tri-City Outlaws still ended the season on a high by taking a trio of top honours in the Northern Football Conference.

Quarterback Dan Daigle was named the outfit’s most valuable player in the league’s year-end awards which were announced earlier this month.

Ashe came out of retirement and rejoined the pigskin loop this past season and led the league with 618 receiving yards and six receiving majors.

The Outlaws went 6-2 and tied for second overall in the men’s league. The club, based in Cambridge, marched all the way to the final but lost 50-14 to the GTA All-Stars. The Toronto-area bunch went on to win the national title 18-17 over the Calgary Gators.

The Steel City team has been evolving and pushing to make a playoff run. With the sudden departure of the Sault Steelers, the Patriots want to ensure their fans they aren’t going anywhere but the playoffs.

The Patriots have made a number of dramatic off-season moves to keep them a dangerous threat in the NFC’s Eastern Division. From acquiring their new offensive coordinator Kyle Cole. To bringing a renewed ground game in their running back Tony Furlone. To finding a shutdown Defensive Back Donovan Saunders. The Patriots hail this season as The 2017 NFC Championship Tour.

Philip D. Costantini “Cosz” Owner, V.P. Football Operations for the Patriots wanted the fans to get the following information for their rematch with the Outlaws.