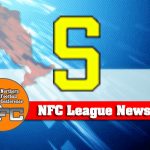 Written by Brian Kelly of the Sault Star – Please share the original story to ensure coverage of NFC Football and help the reporters and local papers.

The NFC executive are fully committed to making the league and the season work. More news on the repercussions and solutions to follow.

Sault Steelers will spend the 2017 season on the sidelines because the Northern Football Conference team doesn’t have enough players to compete.

“It’s better to default early than during the season, which just causes a whole bunch of confusion and problems for the league,” he said. “It’s better to do it now than it is to wait.”

The team’s season was scheduled to start with a home game against North Bay on May 27.

Only about 15 players committed to playing for the semi-professional team this summer. Reid wanted close to 30.

A light bench was also a common problem for road games during the 2016 campaign. Reid’s concerned too few players increases the likelihood of injuries, compounding the limited roster.

He and his coaching staff are “not really sure” why enough players couldn’t be recruited given possible talent available from several sources including high school and university teams and Sault Sabercats.

“There just doesn’t seem to be any interest out there right now,” said the team’s former defensive co-ordinator who began his current role in 2016. “It’s been very difficult and frustrating. to be honest with you.”

Reid suggests some younger players may be intimidated playing in a league that features some former Canadian Football League talent.

“Maybe a lot of people are under the misconception that they can’t play at that level,” he said. “I think they can.”

“These kids (Morrison, Hoover) are getting the recognition,” said Reid. “I’m not worried about the skills.”

The team has about six months to drum up enough player interest to return to the NFC in 2018. Team meetings begin in November.

“If there’s interest then somebody has to start coming forward,” said Reid. “It’s almost an immediate thing. People have to decide whether they want to play football.”

The Steelers can opt to stay on hiatus for more than a year, if they pay the required fee to the league.

“Taking this hiatus might be something that we can regroup and see what happens next year,” said Reid. “In saying that, next year starts very soon.”

He is keen to have the Steelers back on the field so there’s another option for football players from the city.

“We really want to grow, and continue these opportunities, for kids in Sault Ste. Marie and players in Sault Ste. Marie,” he said. “There is some frustration there, but I mean there’s not a lot you can do. You can’t beg people to come out. We want to see it survive.”

Team members in the league’s hall of fame include Steve Edwards and Robin Wood.

The North Bay Bulldogs are returning to the NFC. The North Bay team is gearing up, signing players and ready to begin their new campaign in the NFC for the 2017 season. Their program ended it’s NFC run in 2010. The Bulldogs went back to the drawing board and began a new system that started at the Junior Varsity level. Then a Youth tackle league was created followed by a Bantam program – all successful in their respective divisions. With a culture of football transcending through the age categories a wealth of talent has emerged ready to play in the NFC.

The NFC welcomes the North Bay Bulldogs back into the league. More on the detail later.

Here is their press release and hype video:

From 1952 through 2010 North Bay has fielded Senior teams to compete provincially in the Northern Football Conference.

Since 1991 the North Bay Bulldogs competed in the NFC yet recognized the challenges of fielding a team. Several elements drove the success of the team from talent pool population, to injuries and player retirement.

“By identifying the gaps in fielding a successful team year over year it was decided to take a leave from the NFC in good financial standing and rebuild our talent pool,” stated Bulldogs President Marc Mathon in a release.

“Over the past 6 years the North Bay Bulldogs have focused on building their football club to generate additional football pedigree and hunger for the game.

“Almost 1,000 players later since 2004 through our fall youth and summer programs, our numbers have spoken & we have notified the Northern Football Conference that we will field a team the summer of 2017.”

The Bulldogs will suit up in new black, gold, grey and white jerseys, which was decided by the players.

“We are excited about the prospect of NFC football in North Bay… and so are the number of players asking us to move this project forward,” added Mathon.

To date Mathon says there are a couple dozen players who have formally expressed their intention to play and at a player fee cost of under $300 its going to be very affordable.