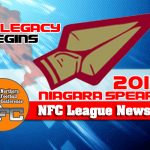 The Northern Football Conference is excited to add the Niagara Spears to our list of Member Clubs.

Please welcome the Niagara Spears to the NFC. The NFC is excited to bring another great organization and football team to challenge the NFC alumni.
At the Fall NFC meeting – the member clubs voted in the Niagra Spears organization for the 2019 NFC Season. The Spears are our newest expansion club. A solid football organization with a long history. They currently have a great youth program with the full complement of Bantam, Junior Varsity and Varsity teams. Now they are ready to play with the men.
As has been standard practice for a number of years. As a new member of the NFC – Niagara has a few conditions and restrictions on who they can register as a player for their first 3 seasons in NFC.
The Niagara Spears registration conditions/restrictions for their first 3 seasons in the NFC – 2019, 2020 and 2021 are as follows:

2 – No more than 2 players from any other NFC team up to a maximum of 6 players per year.

*These registration conditions / restrictions are in effect for 2019, 2020 and 2021 NFC seasons. The purpose of this is to ensure that the Niagara Spears bring new players to the NFC.
*If a Player signed and played with SCP or OAK during the 2016, 2017 or 2018 NFC season- the Niagara Spears are unable to sign that player until 2022.
*To be clear – there is no waiting period. If the player’s name was on an SCP or OAK roster in 2016, 2017 or 2018 NFC season – Niagara cannot sign them until the 2022 NFC season.
*These conditions / restrictions apply to players only and not coaches, or other volunteers.
Please direct inquiries back to your member clubs or the NFC Executive for clarification.