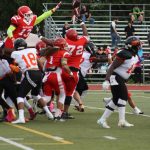 Please like and share the original story to help local media with their coverage of NFC teams and events. Original article: http://www.hamilton-today.com/sports/allstars-end-patriots-undefeated-season-in-finale/

Last Saturday night The 2018 Northern football Conference regular season came to a conclusion with a full slate of games which will be recapped at the end of this article. The marquee game of the week featured The 2017 National Champion GTA All Stars (7-0) vs The SCP Patriots (7-0). This was a game that was circled on the calendar of the players of both teams due to their fierce rivalry since The Pats joined the league.

The game was played on an overcast night in front of a huge raucous crowd that was looking for SCP to end the winning streak of The All Stars and clinch first place overall in the playoffs. The game did not go as planned or The home squad as they gave up 135 yds on 16 penalties and The GTA team capitalized to take an early lead which they did not give up in spite of their 250 yds in penalties.

The bright spot was Donovan Saunders who took an errant GTA pass back for a 109 yd pick six, the 10th one of the year for SCP. But in spite of an epic effort by all the players it was not to be as The Pats were downed 41-7.

Next up for SCP is a home playoff date against The Tri City Outlaws who come to town looking for revenge after they were defeated 21-7 week 6. The Patriots will be looking to go back to our winning ways after being defeated in the season finale last week. Tickets are just $10 and we will have our BBQ and Apparel available as well as The Steel City Steel “hers” who will perform at halftime. Let’s fill the stands and rock our house.