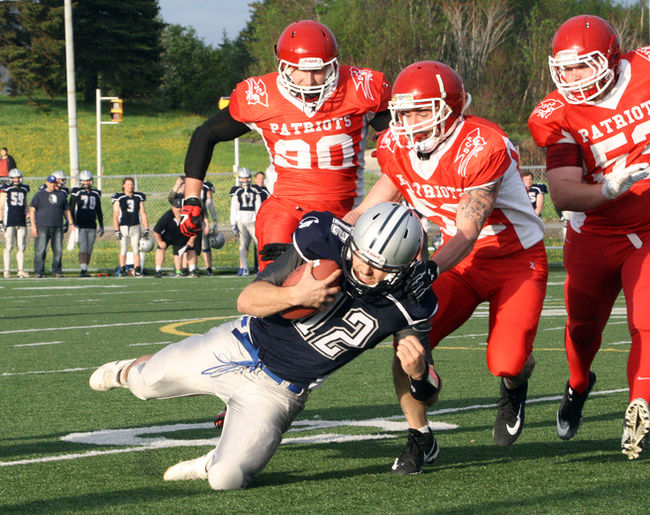 Original article:  http://www.thesudburystar.com/2018/05/27/spartans-optimistic-despite-defeat
Please like and share the original story to help local media with their coverage of NFC teams and events.

His team had just suffered a season-opening defeat and man, was he sore.

But Matt Glass had reason to feel good about a gutsy performance in his Northern Football Conference debut at James Jerome Sports Complex on Saturday night.

“It was definitely a different league,” said the rookie running back/receiver, moments after the final horn sounded on a 22-7 loss to the Steel City Patriots. “I’m definitely playing with bigger and better players I’ve never played before, so the intensity of the game was higher, the hits were harder, but I enjoyed it.”

The highlight was certainly his first NFC touchdown, a pass from Hunter Holub and a short run in the second quarter of Saturday’s contest, one of Glass’s four catches for 22 yards.

“As the confidence built up, I started to get a little better, started to adjust more to this new league,” said Glass, previously a standout in the high school and summer varsity ranks.

“I started to figure out what works, what doesn’t work.”

Whether it was Glass, who also recorded 41 rushing yards, Matt Kuzenko, who led the team with four tackles, or defensive back Riley Roy, who had two interceptions and a batted ball, Spartans head coach Junior Labrosse was encouraged by the play of his newcomers and felt there was plenty to build on as the season goes along.

“Growing pains, I knew was going to happen,” Labrosse said. “Hamilton has been training indoors since January, because they have the facilities down south. We don’t have those facilities here and we basically get a month of practice outside and the city books us for an hour and a half. There’s a lot you have to do in an hour and a half, especially when you have this many rookies to this league, where they have to bond and get that connection to their receivers, their running backs, the line, the timing and all this kind of stuff.

“I knew we were going to be in tough, that it wasn’t going to be a cakewalk, and any time you play a southern Ontario team, they have a talent pool to pick from, but I guarantee you if you look at the guys who got knocked out, not our guys. Our guys can play, they hit.”

Labrosse credited the Sudbury defence, the team’s greatest strength last season, for holding them in Saturday’s game while the offence sorted things out.

That defence looked strong early, as the Patriots made their way deep into Spartans territory on the opening kickoff return, only for Sudbury’s Joe Shyminsky to sack Steel City’s Denzel Rocha for a big loss. The visitors had to settle for a single after a missed field goal.

Emotions ran high at times, with both teams giving up several yards in penalties and a good bit of talk between benches, especially in the first half.

Some untimely Patriots penalties helped Sudbury on a long drive led by Holub, Glass and Josh Cuomo, a former all-star running back who played despite a nagging injury and posted a team-high 66 yards rushing, along with 39 receiving. Glass finished things off by taking a pass from Holub near the end zone, taking a hit from a Steel City defender and stretching across the goal line for a TD.

“We haven’t been in full gear practising for more than a month, so we’re still getting everything together, but I think we played great for how much practice we had,” Glass said. “We’re ready to hit the rest of the season hard.”

The Patriots, who picked up several starters from the Oakville Longhorns in the off-season, got their offensive game going later in the second quarter and pulled ahead after a bit TD catch by Josh Vandeweerd with 1:04 left before halftime. Another pass to Cordel Lewis put them up 15-7 in the third and Holub threw an interception for a touchdown, this time by Donovan Saunders, with 3:46 left in the frame.

“Hunter threw a few picks, but it’s a fast game and he’s been out of the game for a little while, too,” Labrosse said. “A few times, there were some breakdowns on the offensive line where there was pressure. There are certain things that are going to have to be addressed, like there’s one guy in the offensive huddle that’s going to talk, and that’s the quarterback. Nobody else has an opinion. When the quarterback has to take a timeout because the offensive line is getting angry or whatever, it doesn’t matter, I’m calling it. Shut up and run the play. That’s what these guys have got to learn. If they can learn to just do as they’re told, they’re going to be great and we’re going to be fine.

“To me, everything was positive tonight. I would have liked to win, but if we can compete with a team that loaded up, took 12 players from Oakville, starters, and we gave up 22, but those were our mistakes, fixable stuff. Last year, that stuff wasn’t fixable. That’s the positive thing.”