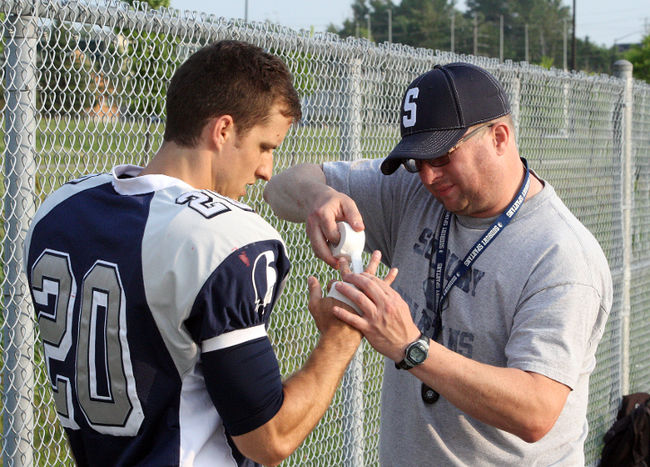 Bill Costello’s father, the late Gary (Satch) Costello, had him well prepared for a life on the sideline with the Sudbury Spartans.

That goes for not only Costello, the general manager and head trainer for the local Northern Football Conference outfit, but also the likes of equipment manager Mike Lynott, trainer Al Kuzenko, water boy Alex Dodds, as well as youngsters who may rotate in and out depending on availability, but whose contributions remain vital to making game day at James Jerome Sports Complex a success.

All volunteers, they’ll be working hard as ever when the Spartans kick off the NFC post-season Saturday against the Ottawa Sooners.

“The staff I have are actually amazing, that they are able to do what they do,” Costello said. “It’s a lot of little tasks to be able to take care of the big event.

“All of them make sure that these guys look and feel like they’re prepared for a game. There’s a lot of time that goes in before and after the game, from taping ankles to washing uniforms a couple of days after the game.”

As much as he trusts his staff, and full as his plate may be, Costello has yet to step back and embrace a more strictly managerial role. That may happen eventually, but for now, he enjoys being immersed in the game-day experience.

“It’s kind of a tough one,” he said. “I absolutely love the game days. It’s being able to find the right type of people to surround myself with, but I would love to be able to do a little bit less. Junior (Labrosse, head coach), Wally (Wilson, special teams/offensive line coach) and Gord (Goddard, president) are actually always pushing me to do a bit less every year and you know what, sometimes the grandiose plan is to get a fully-fledged training staff and everything, but i like to lead from the front, lead by example, and I’m not willing to get someone else to do something unless I’m willing to do it myself. That’s not to say I wouldn’t give up a lot of this stuff, but hopefully each year, I can manage a little bit more and do a little bit less, not have to tape at the games, but kind of sit back and schmooze a little bit with the fans, see all my alumni that have actually come out to the games. The future’s a little bit brighter for me, with all of the stuff that has happened the last few years, and I think it will be good for the next few years.”

Among the most significant changes has been the purchase of the Spartans by local businessman Dario Zulich in spring of 2017 and their incorporation into Sudbury Wolves Sports and Entertainment, alongside the Sudbury Wolves hockey club and Sudbury Five basketball team.

Both of the sister squads will be well-represented at Saturday’s playoff game, as sponsors for the event.

Activities are to include fan giveaways, an appearance by the Sudbury Five Dance Squad and a performance by local musician Dan MacDonald.

The Dellelce Family Hospitality Tent will be open before and during the game.

“All year, it has been building to this,” Costello said. “We had our home opener and the beer tent came along, we had some SPAD (Laurentian University sports administration) students who were able to come and help out, otherwise, we wouldn’t have been able to do some of this stuff. As a solo organization, we weren’t able to do that in the past, and now, we’re actually part of a bigger organization, there’s a lot more back-room support for these types of things.

“They will feed one another. Hopefully, my players and my staff can actually go down to a Five game and maybe volunteer to do some security or some public relations stuff. There’s a little bit of give and take with that, but overall, the organization has been absolutely amazing and patient, because football is very different from hockey and basketball is very different from football. We are like a family, because a lot of the organization involves friends and families, but now the public is getting on board and seeing that it actually is quality football, and having that promotional end of it, to actually market and promote it, from the Sudbury Wolves, I couldn’t ask for anything better.”